Authentic Kenny Baker Autographs | Star Wars R2-D2. Below are genuine examples of autographs from Kenny. Many obtained during his time attending conventions.

Kenny Baker, (Kenneth George Baker), British actor (born Aug. 24, 1934, Birmingham, Eng.—died Aug. 13, 2016, Preston, Lancashire, Eng.), played the robot R2-D2 in six Star Wars films, from the 1977 original (Star Wars: Episode IV—A New Hope) through the prequel Star Wars: Episode III—Revenge of the Sith (2005). Baker, reportedly given the role because he fit inside the costume and was strong enough to operate it. Credited with imparting charm to the android, despite having no speaking lines. He began his performing career in his teens, when he became a member of the traveling variety show Burton Lester’s Midgets. Also, Kenny Baker later worked in a variety of roles in nightclubs, resorts, and theatres and performed in an ice-skating show.

For a time he was a clown and a shadow ringmaster in Billy Smart’s Circus, and he later settled into a career as half (with Jack Purvis) of a comedy duo billed as the Mini Tones. In addition to his role as R2-D2, Baker played an Ewok in Star Wars: Episode VI—Return of the Jedi (1983). He had a small part in The Elephant Man (1980) and portrayed Fidgit in the adventure comedy Time Bandits (1981). He also appeared in Amadeus (1984) and the live-action film Sleeping Beauty (1987).

R2-D2  or Artoo-Detoo is a fictional droid character in the Star Wars franchise created by George Lucas. He has appeared in ten of the eleven Star Wars autographs films to date. At various points throughout the course of the films, R2 is a friend to C-3PO, Padmé Amidala, Anakin Skywalker, Leia Organa, Luke Skywalker, Obi-Wan Kenobi, BB-8, Rey and D-O. R2-D2 and his companion C-3PO (Anthony Daniels) are the only characters to appear in every Star Wars film, with the exception of Solo: A Star Wars Story.

English actor Kenny Baker autographs played R2-D2 in all three original Star Wars films; and received billing credit for the character in the prequel trilogy, where Kenny Baker’s autographs role reduced as R2-D2 portrayed mainly by radio controlled props and CGI models. In the sequel trilogy, Baker credited as consultant for The Force Awakens; however, Jimmy Vee also co-performed the character in some scenes. Vee later took over the role beginning in The Last Jedi. Hassan Taj and Lee Towersey perform the role of R2-D2, replacing Jimmy Vee, who had played the role in the previous two films.

R2-D2, designed in artwork by Ralph McQuarrie, co-developed by John Stears and built by Peteric Engineering. The revised Empire Strikes Back droids, built by Tony Dyson (sometimes incorrectly credited as the “maker” of R2-D2) and his Rocking Horse Toy Company. R2-D2’s sounds and vocal effects were created by Ben Burtt. 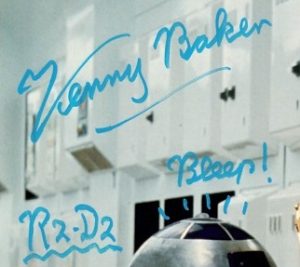 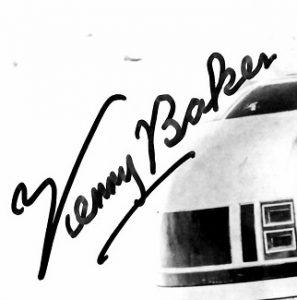 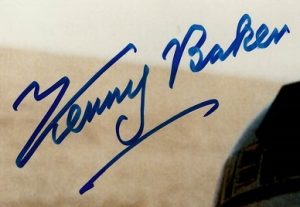