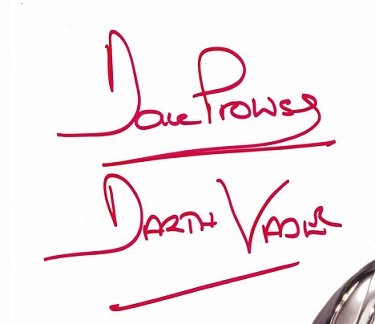 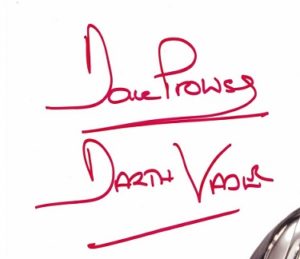 David Prowse (born July 1, 1935 in Bristol, England) is a former bodybuilder and weightlifter who became an actor. Selected to play Darth Vader in the original trilogy and The Star Wars Holiday Special due to his height and girth. He would speak the lines from within the suit during filming in his Bristol accent. However, as this ultimately clashed with George Lucas’s idea about Vader, James Earl Jones dubbed over as Vader’s voice — a fact unknown to Prowse at the time of filming. Prowse reprised his role as Vader for the games Star Wars: The Interactive Video Board Game and Star Wars Monopoly. 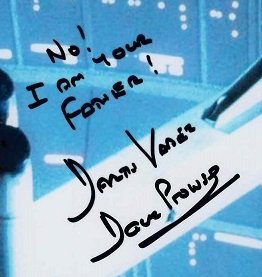 Prowse complains that he never got any publicity as Darth Vader. He had chosen to play Vader because he felt the villain was usually the most memorable. Prowse’s favorite acting role, but, is the Green Cross Code Man, a character used in public service announcements in the United Kingdom to teach children road safety.

In 2005 Prowse joined Jeremy Bulloch, Michael Sheard and Orli Shoshan in the final two parts of UK fanfilm trilogy Order of the Sith. Prowse played a rebel officer in charge of the main character. The films made in aid of the Save the Children foundation.

Early in his career Prowse in a film called Frankenstein and the Monster from Hell; produced by the English Horror Film Company, Hammer Studios. Prowse played the role of the Frankenstein Monster. In the same film, Peter Cushing who would later play Grand Moff Tarkin in Star Wars; Episode IV A New Hope, plays Dr. Frankenstein. 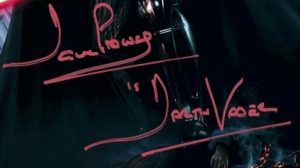 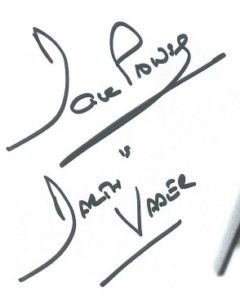